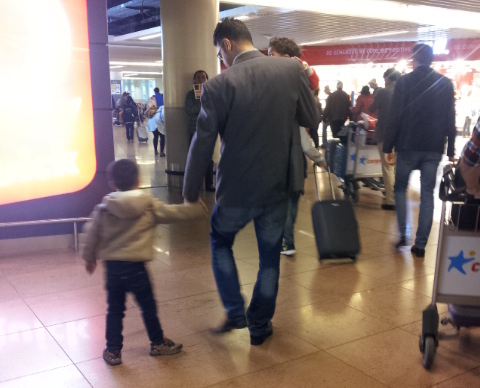 by: Adnan, a Syrian Refugee in Belgium

Following our marriage, in 2010, the revolution in Syria began. In 2012, I finished my master’s degree. But, due to my problems with the Syrian regime, I couldn’t have a job in a nearby private university where I used to teach. It was almost impossible to pass through the regime’s checkpoints. I spent the following 18 months in my hometown volunteering to provide humanitarian aid to displaced people and other people in need. The town was besieged for almost 2 years.

In 2013 the shelling of the town badly increased and I fled along with my wife and son. We headed to an Arab country. After we fled Syria the Syrian regime forces invaded the town along with their allies, the Shi’a militias from Iraq and Lebanon. We spent 14 months away. Then I heard the bad news coming from my home town: The loss of my father. The arrest of my brother and uncle who were, after several months, killed under torture by the regime’s security forces. We were in despair. But we had to overcome fear, sorrow and anxiety over the future. It was the path chosen for us. It was our fate.

My wife had to come back to Syria in order to give birth to our second child. I had no choice but to send her my in law’s house. I headed to Turkey and found a good opportunity to work for an international NGO. Unfortunately it was short term contract. After 4 months my wife came to Turkey along with the kids. It was very joyful moment to reunite. We spent 4 months together.  I searched high and low for another job. It was not successful like the first time. I was running out of money in country which I can’t have a legal residency permit or work permission. I tried and searched more and more. But I failed.

When one journey of suffering ends, another begins.

I had only one choice: to send my family back home again and march to Europe. But this time the journey was far longer, far bitterer, and far more painful. I spent every last penny to reach Belgium. I was away from my family for a total of 18 months, 20 days and almost 5 hours. I tasted all kinds of sleepless nights, day dreaming and other problems.

Finally I reunited with them thanks to the great help offered by Miles4Migrants. I really appreciate their help and thank them deep from my heart.