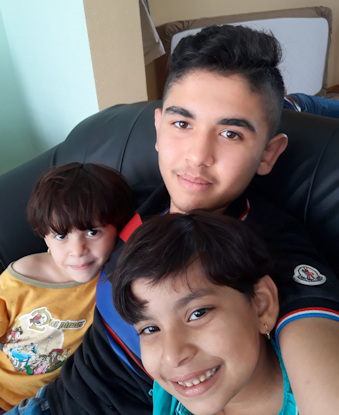 by: Tarek Alsuliman, a Syrian refugee in Belgium

My name is Tarek. I am from Syria, and I used to live with my family in Aleppo. When life in Aleppo became very dangerous, I started a 12-day journey to Belgium, together with my uncle Youssef, who is the brother of my father. My family stayed behind in Aleppo because it was too expensive for my whole family to make the journey. It was very difficult to leave my family, but if I would succeed in applying for asylum in Belgium, I knew I could bring my family over in a safe and legal way. The scariest part of our journey was when we took the boat from Turkey to Greece. I was terrified and feared for my life. Luckily, thanks to God, we arrived safely in Belgium on the 2nd of August, 2015. We were on the road for 12 days, along with a lot of other Syrian people. At the time, I was only 13 years old.

My uncle and I went to the immigration office in Belgium to apply for asylum. Because there were a lot of people applying, I had my first interview in December 2015; I had to wait 4 months. The second big interview was 4 months after that. Then, in May 2016, I was finally recognized as a refugee by the Belgian government. I finally got to leave the refugee camp along with my uncle, and we rented an apartment in Ghent. Now, I could start with the procedure for the family reunification. I went to Caritas Internationals so they could help me with the procedure. My family needed help to know which documents they should collect and to make an appointment at the Belgian embassy in Beirut.

I had to wait again to have an appointment at Caritas because of high demand. In July 2016, I met Marie, the social assistant, for the first time. She explained everything to us so we could start. In October 2016, my family applied in Beirut for the family reunification visa. I was very happy, but also stressed, because I was afraid that they could be refused. In Belgium, the immigration office has 9 months to make a decision, but a lot of Syrian friends who did the same procedure received a positive answer after 5 or 6 months. I thought it would be the same in my case. We called a lot of times to Marie, but every time she told us that there was no decision yet. It was very, very difficult because I missed my parents, brothers, and sisters. I was also very worried about their safety because it was very dangerous in Aleppo.  Then, after exactly 9 months, we had a positive answer, and my family went to Beirut to pick up the visa. I was over the moon, and now I really couldn’t wait any longer!

Marie already talked about Miles4Migrants, and because we are such a big family, all financial help was more than welcome; It was necessary! Once my family received their visa, she contacted Seth from Miles4Migrants to see if they could book tickets for us. It was very complicated because they are 7 people: my parents and 5 siblings. Marie, Seth, and a family friend named Adham were communicating constantly during 4 days to find tickets that could get them all to Belgium. It was very stressful because their visa to stay in Lebanon was going to expire. They would have to return to Syria if they didn’t get flights within a few days. Finally, everything worked out, and I could go with my uncle to pick up my mother and 3 siblings in Dusseldorf. A day later my father and two other siblings also arrived in Dusseldorf. They had to travel in two groups because those were the only flights available. I was crying and I couldn’t believe that they finally arrived! I am so happy that they are safe now.

My life is so different since their arrival in the end of August. The only thing that bothers me is that I can only see them on the weekends. I still go to school in Ghent, but my family lives in a camp in Brussels because they have all asked for asylum. When they receive their refugee status, we can all live together in Ghent. I am looking forward to this moment. They already completed their paperwork and interviews, so now we are waiting for the decision. But I am so happy we are all safe in Belgium.

My family and I would like to thank Kevin Ma, who donated his miles to get my family to Belgium. He changed our lives. Without his help, I do not know how we would have paid for the tickets. He is our hero!! I hope that a lot of other people will do the same as he did. Because a lot of other families need financial help. We were so lucky. Also a big thanks to Miles4Migrants and Caritas International for all the help!!

Kind regards from the Alsuliman Family