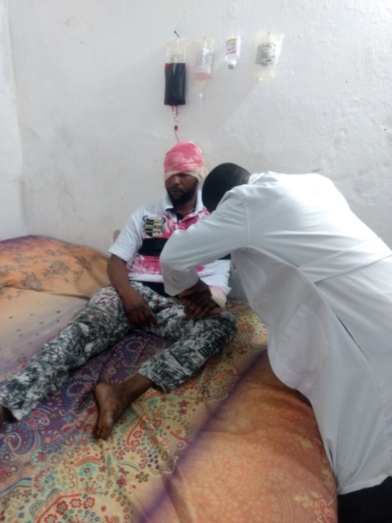 by: Mapasa, with translation by Rosemarie Doucette at La Posada Providencia

I am MAPASA.  I am Congolese from Kinshasa. I am an independent protester.  Like a Congolese fighter for the liberation of our country.  It is like a partisan of the UDPS.

I am fleeing my country because of the dictatorship, the aggressions, the massacres, the violence of President Kabila Kagange……… as I saw my country under occupation with a dictator I took the popular mobilization (lifting) to demand our rights.

Article 69 of the Congolese constitution says this that when the president does not want to organize the elections we have to get out in the street and fight against their right.

But when the people have a manifestation, as the army is for the president, they have a massacre to kill us.

December 17 2016  It is the end of the mandate for Kabila Joseph  but he did not want to organize leave his power.  Me, I mobilized the population to declare for our law against the resistance of the president, and when we wanted to get out in the street there was blood, (people) killed for ………..

February 25 2018 it was the Christian march organizer papa Mosengo the whole march they killed us like animals       we have supported ……marche…….. to show that the Christians have famous hopes but it was even more pure the violence, the killing the (sisters) of the church violated (raped) in the Catholic church.

But I was (removed?) with tortures by police     I was stabbed in my right eye in the fight for the liberation of my country and it is for this reason that I am fleeing my country  (…..) threats I was in the Catholic church to take care but the Father (priest)  was threatened in order to tell where I was with the torture and my father just died and the Catholic priest made me flee Brazzavile, Congo.

Also I was in insecurity.  I flee to the black tip where I saw a boat (on which was written) Panamerica and I negotiated with the boat worker and they helped me to Ecuador where I spent two months after that I continue my trip (to) Colombia, Panama, Costa Rica, Nicaragua, Honduras, Guatemala, Mexico, in order to arrive in the United States.  It took me nine months to get here, a lot of suffering

But God is good I am still alive

Thank you for your help

Note: this was translated from handwritten pidgin French, our apologies for any difficulty with reading it