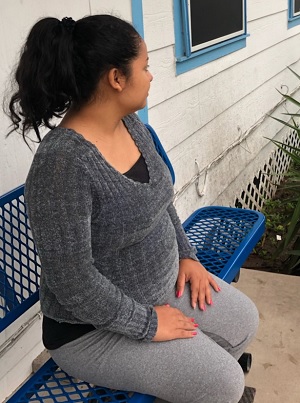 by: Berta, a Honduran Asylum-Seeker

I grew up in a Christian family; very respectful and filled with love. At the age of 17 years old, I fell in love with a person I met at work. I worked in a restaurant and that is where I met that man. Then they fired him for taking drugs to work and since I had already accepted to talk with him and to going out with him, he forced me to go live with him.

That is where I came to know what he was. I tried to end it with him, but it was too late, I couldn’t. He told me I was his and only his and no one else could touch me. I was 5 months living with him and during that time I saw everything he did– they were all bad things. I felt really bad when he would kill people I knew. Then his sister told me that Marco, my ex-partner, was about to do something crazy and to leave to my aunt’s house to stop him. I left work and I went there directly. I tried to stop him, but it was too late. He had already shot my aunt and my two cousins. It happened too fast at 6:00 in the evening. Their little children were crying on top of her dead mothers. Everything was so terrible.

Then I took courage and decided to separate from him knowing that sooner or later he would kill me too. But I didn’t care. I no longer wanted to be in that relationship. He put me down daily saying that I wasn’t good for anything because I wouldn’t do what he asked me to do– to harm others. He is in charge of selling drugs and responsible of a lot of illicit money. He wouldn’t stop threatening me. I was already fed up with his daily threats and harassment, but I decided to make an anonymous call to the local police, and I thought that placing the report would end everything that was going on because of him. I knew the danger that it was for me, but I decided to make the call. I reported what was happening. I practically was giving them a murderer. I even told them where they could find him. To my surprise about 5 days later the gangs arrived at my house. They took me out to the street and began beating my face and said if I didn’t know what happened to snitches who opened their mouths about what they knew. And they played the recording of the call I made.  How they obtained the recording, I don’t know, but they said that their boss wanted to see me say bye to this world. Then they returned and they called me, but I didn’t go out and they beat my brother. They left me a paper where they said I had pending business with them. Then I left to another place to live and there I went to live with a man who was good and who helped me a lot. But that man (Marco) found out where I was and that I was with someone else. It was then when I decided in October to leave my country.